The Boy Who Could Fly

I was a weird kid. No, really.

When I was but a wee lad I believed a lot of things that most would deem inconceivable.

Besides a lot of the usual childly experimentation I used to think – no – I actually believed I could fly. I swear. To this day, I am convinced that I did. No, I didn’t jump off of a three-storey building and take off like the man-of-steel. It was more like floating. And before you go there, I was only 3 the first time I attempted it so I wasn’t “high”.

I would climb to the top of our ghastly carpeted 9-step staircase, grab the railings on both sides and throw myself forward toward the hard and cold brown tile. Luckily, there was never a splat. I would most certainly fall, but it was so wonderfully slow and graceful. I reached the bottom without so much as bending my knees to cushion the landing.

I told you I was weird.

Weirder still, was the fact that I would repeat this for a solid two years with the same result. It was my happy little secret. I had super powers. The freedom and fulfillment was absolutely the most satisfying thing I have ever experienced.

Then I made a huge mistake.

And when that person, who was older and wiser than me, told me that it was impossible, I was crushed.

So I told someone else, and then another, and another – who “naturally” all gave me the same advice. I still did not want to believe them. After all, what did they know? They’re not the one’s who experienced blissful levitation. I did! I knew what I was saying to be 100% true. Still, a part of me felt even more special. There was no one who could do what I could. 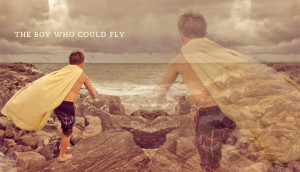 So there I was at the age of 5 at the top of the stairs, ready for liftoff, and then it happened. I hesitated. Something was off. I tweaked. I still jumped mind you, but the result was different. The landing was a lot harder than I remembered. It was tremendously upsetting. And every time I heroically climbed to the peak of that staircase and flung myself off to attempt to reclaim the glory of flight the landing became progressively difficult. Until eventually it just plain hurt.

It is, I suppose, a sad reality. It’s what happens when fear sets in. When the rules take a strangle-hold on your brain and convince you to be normal. Average even. It was a lot to take in as a 5-year-old. It’s even harder for me now.

That’s what I experience daily from a myriad of “smart” adults. Those who believe in the rules around the tried and tested, that deliver plain and unremarkable results. The status quo. Barely anything ventured and not really a lot gained.

What happened to us?

When did we stop believing that we are capable of amazing achievements? When did we become so wrapped up in the standard approaches that we all but strangled the opportunities? Why do we always insist on playing it safe? Is it the risk of failure that grounds us?

I have presented revolutionary ideas, methods, tactics and strategies to many who will initially boisterously applaud only to sink back into their narrow comfort zones. And believe me, these creative approaches are all backed by a significant amount of intelligence and insight. This is not creative for creative-sake. It’s just that their hearts are eclipsed by the monotonous fortitude of their brains. I mean it. All of them are smart people – they just can’t seem to muster the courage to take the leap. They, too, are afraid. And sadly, for the wrong reasons. Be it lack of knowledge, foresight or simply the pressure that comes with the fear of failure.

They all want spectacular results without themselves doing something spectacular.

It doesn’t work that way.

Ironically, we are all quick to remark on the pioneers. You know them. The people. The brands. They just have this wonderful knack of standing out, don’t they? They put themselves out there, mix things up, are unconventional – and they achieve great success. All in such a wonderfully calculated manner, armed with the knowledge that blending in, doing the same thing as their competitor or just performing enough to get by is a recipe for disaster.

And we admire them.

I ask you now. Why don’t you want to be exactly like them? Why don’t you, too, redefine the value of “risk” and finally realize that doing the same thing over and over again is the riskiest thing you can do?

Let’s do it. Let’s do it together. Let’s be hyper-intelligent, strategic, creative and remarkable. We can leap confidently and watch the ants do their march below while we soar to new heights.

I’m not afraid anymore. Won’t you fly with me?