How creativity leads to better results

Creative agencies have always struggled to prove their value. So why is it that the task seems to be even harder today?

Put simply; traditional creative work is being eclipsed by digital channels that are data-literate and focus on linking their work to bottom line returns.

Technology companies have done a much better job of helping prove value to the client’s CFO.

So, what can creative agencies and their clients learn, and how can we prove the value of creativity?

Firstly, we need to compare apples with apples. Technology platforms such as email, marketing automation, and social platforms are media channels and focus on efficiency, which has risen to the top of priorities, thanks to digital’s capability to deliver immediate numbers.

Of course, it doesn’t mean they’re the best channels; it just means they’re the most measurable.

The outcome is that it has relegated more traditional brand-building efforts further down the list of things that marketers get to do because it’s too difficult to measure in the short-term and prove the value of it in the long run.

How to prove value

Firstly, this is nothing new. Media planners have always had to prove the value of their plans.

Digital has increased the pressure for results because digital channels offer measurement baked into their media process and can return statistics for an outstanding rate, almost immediately.

However, the problem is, most measurement models only attribute the sale to the last touch point and within a very short timescale. For example, sales may be attributed to the most recent direct marketing campaign and assign nothing to the brand campaign that ran two years ago. This is a bit like attributing a goal scored in a football match only to the striker while ignoring the team's efforts to pass the ball to the goal mouth in the first place. 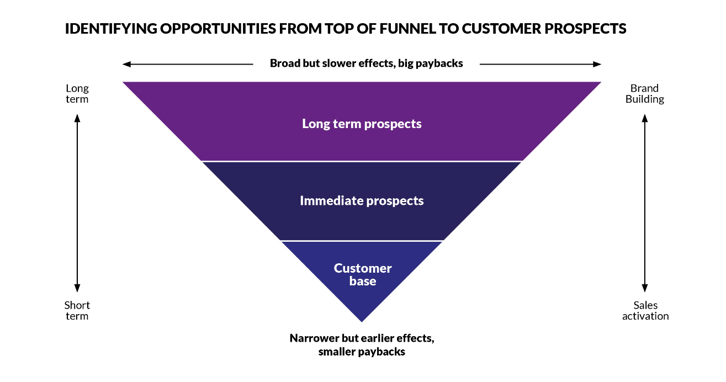 Measuring the effectiveness of the message

When most people talk about creativity, they mean the creative articulation of a message and not the communications channel used. So to help us, we looked at the memorability of rational and emotional elements of a message. In summary, rational messages drive direct and immediate responses but decay in their memorability and effectiveness very quickly. While emotional campaigns and their effects last much longer than rational campaigns, they tend to accumulate much more strongly over time.

Creative campaigns should be designed to provoke both kinds of response in balance so that the effects are optimised over all timescales. We believe the holy grail of B2B marketing is to unite sales with brand building, for long-term business stability.

Our case study for Micro Focus’ software product called Visual COBOL, conducted over three years, was a gamechanger for us. We were able to demonstrate how a balanced programme was able to achieve both short-term sales objectives while building brand value that contributed to consistent sales over the long-term.

We were able to show how an emotional message, developed as a ‘big long idea’ generated powerful ‘sticky’ memorability and produced considerably more powerful long-term brand effects than rational persuasion ever could.

Conversely, rational messaging was more potent at generating short-term sales effects once the prospect had ‘entered’ the funnel and engaged with our nurturing content.

To measure, we created a balanced scorecard of metrics capable of monitoring both short and long-term sales and brand effects. A critical metric that proved the value of creativity was that for the first 18 months of the campaign, generic Google searches for the solution accounted for the majority of sales. However, after 18 months, our series of brand response campaigns had built momentum, and branded searches contributed to the majority of sales.

The campaign metrics were tracked from front-end funnel to closed sales. Revenues from Visual COBOL grew strongly and ramped up 163% over the campaign from launch. ROI for the campaign was an astonishing 1,083:1 and won the most commercially successful campaign at the B2B Marketing Awards.